Launching in early 2022, the show already has many fans as its first season was a huge hit across the globe. 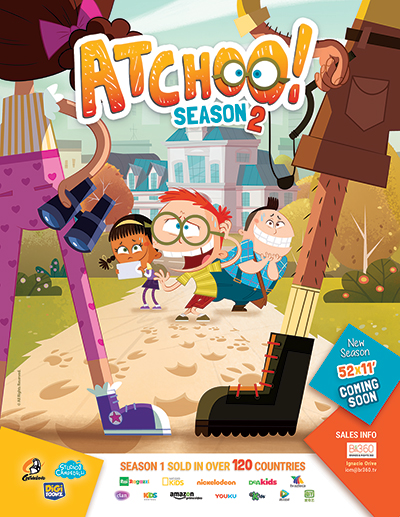 Announcing the news, Kumar shared, “We are extremely delighted and happy to have Atchoo! season two in our catalogue. It’s a hit franchise and the first season was sold to more than 120 countries worldwide.”

The animated series tells the story of Teo, a nine year old boy who has a strange way of expressing his emotions – he turns into an animal, every time he sneezes! The official description follows:

Following 204 sneezes turning him into more than 156 animals, Teo is back with some hilarious new adventures! And there are more surprises to come. Peter, Teo’s gluttonous friend with a chicken phobia, has decided: no more constant snacking, or record-breaking lollipops. And to find a new source of distraction, a new activity to absorb all his attention Peter will be constantly attempting a new hobby in every episode, with hilariously unexpected results. But the most important new development of all means even more trouble for Teo – the Plummer, his new neighbours. Barbara Plummer: a remarkably unattractive, possessive, and totally unpredictable seven-year-old girl, fallen in love for Teo. Berto Plummer: her Bear Grylls-type father.

Currently in production, the show seems to hit all the right notes from the beginning, as the second season has already secured pre-sales with Rai Ragazzi (Italy) and Kids Central (US). It’s slated to release in April 2022.

In India, the first season is available on Amazon Prime Video.